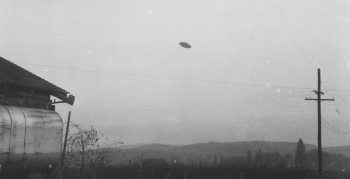 The Story of the Trent UFO Photos

Seventy years ago, an uneventful afternoon became, in just a few chaotic seconds, a life-transforming experience in the lives of a rural family outside of McMinnville, OR. It was also a moment that completely altered the debate surrounding the search for extraterrestrial life and UFOs.

Around 7:30 p.m. on Thursday, May 11, 1950, Evelyn Trent went out to feed the chickens rabbits behind the farmhouse where she and her husband Paul lived. The animals, as she told it, gave no indication of anything unusual. Evelyn was suddenly astonished to see a large, metallic-looking, disc-shaped object hovering silently in the sky, a little to the northeast of their farm. She ran to fetch her husband Paul, yelling for him to grab the camera. He scrambled around looking for their trusty folding Kodak Roamer, then ran back outside.

The disc, still visible in the sky, was moving slowly to the west. Paul clicked off a snapshot and advanced the film as fast he could. The object began to gather speed and turned toward the northwest, forcing Paul to move rapidly to his right to get a second picture. As the object gathered speed and disappeared toward the horizon, the Trents later recalled, it created a silent “wind.” The whole event happened very quickly, and both photos were taken within 30 seconds.

Thinking they had witnessed a government experiment or some secret project, the couple remained quiet about the strange encounter and the photos. It would be another three weeks before Paul took the roll of film into town to have them developed. (Being a practical man, he had finished off the rest of the roll first.) Eventually he showed the pictures to his friend and banker, Frank Wortman, who alerted the local newspaper, the Telephone Register. The paper quickly dispatched a reporter to interview the Trents and perhaps acquire some copies, but when the reporter asked to borrow the negatives, the Trents couldn’t find them. After some searching, they were discovered under the couch, where the kids had shoved them while playing.

As innocent as this story sounds on the surface (for a UFO sighting, that is), the photos that Paul Trent took eventually became more significant than anyone could have predicted. On June 8, the day after the reporter visited the Trents, the Telephone Register ran the photos on its front page,  then sent them and the story out on the news wires––the International News Service (INS) and the Associated Press (AP). A firestorm was ignited; over the next two days, the Portland and LA papers ran articles about the Trents’ photos, then on June 12 and 13, the story broke nationally and around the globe, appearing in newspapers and radio broadcasts in various countries. LIFE magazine, then the nation’s largest circulation magazine, reprinted the photos in its June 26 issue.

The Trents themselves were flown to New York to appear on the popular TV show, “We the People,” on July 7. Interestingly, the show’s producers instructed them to bring the negatives along. The show “borrowed” them, and the Trents never saw the negatives again. When they inquired about it, the only answer they got was that somehow the negatives had been “misplaced.”

National radio personality and self-described UFO authority Frank Edwards claimed to have personally taken two enlargements of the photos to the Pentagon. “I was told,” he said on his national radio program, “they were the best civilian photographs of an Unidentified Flying Object that the Air Force had ever seen.”

While the media frenzy soon calmed down, the controversy surrounding the pictures never did. The photos became some of the most hotly debated UFO photographs ever, growing in significance and attaining elite status as evidence of one of the most reliable and well-documented cases in UFO history. The photos have been subject to intense scrutiny, reinvestigation and reanalysis by investigators and scientists, but the images’ authenticity is upheld.

The Trents, for their part, never even tried to get the negatives back. In his last interview, Paul Trent indicated that the images were more of a hassle than anything. “I took the pictures, but I don’t want them. First thing I know is we’d have too much trouble.” Evelyn agreed, “Like I said, I would never take another picture. Just too much publicity.”

The historic Trent photos are still relevant today. On the Internet and at meetings around the world, the case’s authenticity is still argued, defended and debated. Perhaps we will never know what exactly hovered above the farms outside McMinville back in 1950; honestly, the Trents themselves were never sure.