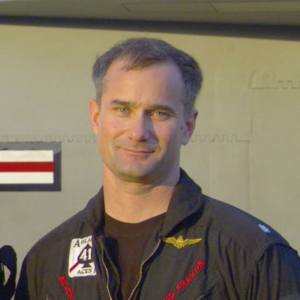 In 2004, Cmdr. Fravor witnessed what came to be known as the Tic Tac UFO incident on a training run over the Pacific Ocean, 140 miles southwest of San Diego. At the time, he was stationed aboard the USS Nimitz as the commanding officer or Strike Fighter Squadron 41, also known as “The Black Aces.” The incident broke into the mainstream media after the New York Times republished a story reported by fellow UFO Festival presenter and investigative journalist George Knapp.

David Fravor enlisted in the Marine Corps at age 17. Two years later, he transferred to the Naval Academy. As a young midshipmen, Fravor did his first training aboard the USS Nimitz and dreamed of someday flying for the Navy — little did he know that 20 years later he would be in command of the same squadron he saw fly all those years earlier. A 24-year veteran in the U.S. military, Fravor retired from the U.S. Navy in 2006, after 18 years as a Navy jet pilot and five deployments in Iraq, beginning with Desert Storm.

Cmdr. Fravor now lives in New Hampshire with his wife, with whom he has two grown children.

Commander Fravor’s description of what he witnessed on November 14, 2004:

[excerpted from an ABC News interview]
“I can tell you, I think it was not from this world. I’ve seen pretty much about everything that I can see in that realm, and this was nothing close. I have never seen anything in my life, in my history of flying that has the performance, the acceleration—keep in mind this thing had no wings.

You know, you see a lot of interesting things. But to come up on something that’s a 40-foot-long white Tic Tac with no wings, that can move really in any random direction that it wants and go from hovering over the ocean to mirroring us to accelerating to the point where it just disappears—like, poof, then it was gone.”